PUB is the national agency managing Singapore’s water loop from catchment through to disposal and reuse. With responsibility for all water management in Singapore, PUB water distribution operations are incentivized to be proactive and manage leakage in their water networks. PUB owns 6,000 kilometers of water pipelines, 1,500 kilometers of which are transmission pipes. 900 hydrophone sensors are deployed on large water mains, up to 2,200mm in diameter. These sensors are designed specifically for underground installation and will perform leak monitoring on approximately 400km of water pipeline. While the sensors are progressively being installed, the benefits can be reaped early without the need to wait till the end of the installation phase.

Each night, at an exact predefined time, all the hydrophone sensors record the acoustic profile within the pipe and send the information to a cloud-based server for analysis using a wireless network and algorithms. The results are translated to system alerts including a detailed GIS map of identified leaks and their estimated size. A unique feature of the AQS monitoring system is an automatic correlation between every two measuring sensors, generating reliable and accurate results in a very short of time.

While the system is progressively being installed and the full evaluation of the benefits cannot be accurately determined as yet. However, leaks are progressively being located which allow for early intervention and reduce water loss. Thus far, 15 leaks have been located. Here are just two examples:

A washout valve started to leak through, discharging water into a closed drain. The system was able to locate it early and allow for early intervention. The leak was located near sensor #1:

Once the system identified the leak, an email with the leak location was generated and sent to the local service team Evergloss and to the managing partner STE to continue onsite investigation. At that point Evergloss, equipped with iQuarius mobile solution and a ground microphone went to the alert location and verified it exist.

A challenge for water utilities is to continually improve their efficiency in the water supply system by reducing water loss experienced in the system. Coupled with global warming and water scarcity, this challenge is exarcebated further. The costs of maintaining pipes that are worn out is high and sometimes require emergency work with higher costs. Water pipes erode unevenly due to environmental conditions, soil, loads and raw material. The ability to identify defective parts in the pipeline in order to replace them and prevent costly maintenance (bursts repairs), water losses and disturbances in the water supply is of great value both to the water corporation and the consumers.

Implementation of technology that provides extensive information on pipeline failures while being repairable or replaceable before damage to infrastructure can significantly save costs in general and water loss in particular. This is a long-term investment that also streamlines the maintenance and management of water assets in the corporation and also increases customer satisfaction while significantly reducing water breaks.

SUEZ New Jersey is responsible for supplying drinking water to approximately one million customers in 57 local authorities in New Jersey, USA, operating a water system in the length of 2,200 Miles. SUEZ experienced growth in NRW due to leaks that did not surface.

Between 2018 and September 2021 SUEZ NJ adopted the Aquarius Spectrum solutions and implemented 2,000 acoustic sensors in New Jersey’s operation. These sensors are permanently installed and monitor the underground pipeline on daily basis, providing accurate location of hidden leaks as well as analysis of the pipeline’s condition to prioritize the replacement of faulty pipeline sections.

SUEZ NJ shared their history of leak repairs performed in years 2016-2019 so that Aquarius could perform analytics of both the history of breaks along with an analysis of the background leaks they identified through their acoustic sensors. This was to assess the condition of the SUEZ water pipes and direct them to the right failing pipes, so that they optimize their annual replacement budget. In addition, Aquarius monitored the growth rate of background leaks to spot sections with high growth rate, which suggests a poor condition pipe. Aquarius is the only acoustic system that can measure and estimate the size of a leak – hence they can measure how fast they grow. Most leaks will not grow unless the condition of the pipe is poor.

By using Aquarius Leak Detection capabilities, SUEZ NJ located and fixed more than 500 leaks during 2018- 2021, which helped reduce NRW by more than 20% while savings Billion Gallons of Water. By using the new Pipe Condition Module, they were able to identify bad sections that suffered from repeated leaks and fast growth rate of leaks. Today pipe renewal is done by real condition rather than age. Aquarius also supplied SUEZ NJ with predictive maintenance report that included the pipes they need to replace to avoid future catastrophes.

Mei Avivim was established in 2010 by the Tel Aviv-Yafo municipality and entrusted with all the water and sewage services within the city’s area including payment collection. Mei Avivim has 61 km of Transmission mains which re monitored by 87 Aquarius multi-sensors. Aquarius also monitors the connecting distribution lines with 200 additional accelerometer sensors.

Aquarius multi-sensors consist of hydrophones + pressure sensors to find leaks and pressure transients while transmission from the same electronic box. These sensors were installed on air valves chambers while tapping to the water. 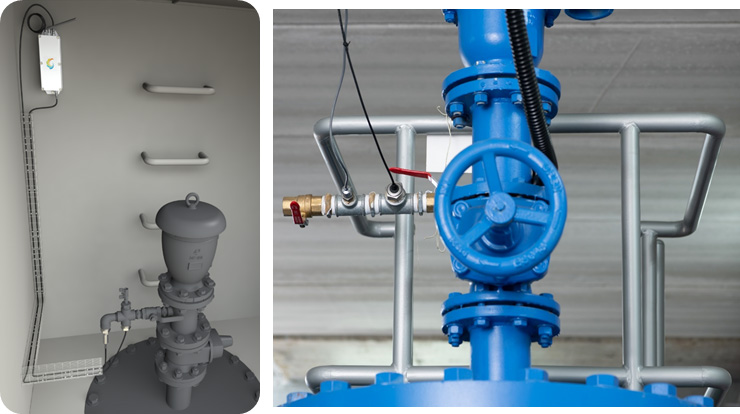 Dozens of transient events detected and fixed during the first year. 7 major leaks identified and repaired. 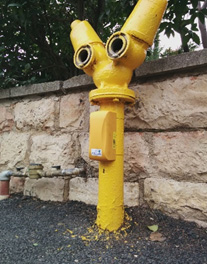 In September 2013, the Utility, together with Aquarius Spectrum, started implementing a fixed water monitoring and leak detection solution. More than 1600 acoustic sensors were installed during 18 months to cover most of the Utility’s water distribution network.

As of August 2016, the Aquarius-Spectrum system has found more than 226 hidden leaks in the Jerusalem area, 171 of which were in the public distribution network and 55 in private properties. Fixing those leaks resulted in potential savings of over a million cubic meters of water for the Utility. NRW was lowered by 18%; the number of visible (reported) leaks (bursts) has declined.

In addition, the Aquarius-Spectrum system has discovered more than 250 non-leak faults, including partially closed valves, faulty water meters, malfunctioning non-return valves and other items of equipment under the responsibility of the water Utility.

The rising trend in the annual number of pipe bursts was halted and a drop in number is evident since the deployment of the system. See below the numbers, year by year. 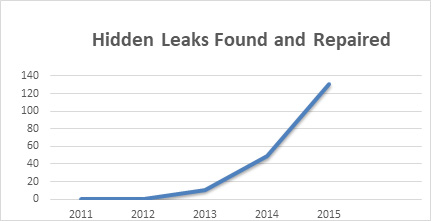 The Aquarius-Spectrum system is helping HaGihon to revolutionize the way it manages leak repairs, allowing it to switch from a reactive mode to a planned approach. The Utility is now able to plan its repair schedule to fix hidden leaks before they become visible bursts, thus reducing the cost of contractors, avoiding collateral damage to infrastructure, informing consumers well in advance of shutting off of water supply for maintenance, reducing shutoff times and improving customer service by notifying consumers of hidden leaks on their premises. All this saves money and improves the level of service.

Thames Water, is a large private utility company responsible for the public water supply and waste water treatment in most of Greater London, Luton, the Thames Valley, Surrey, Gloucestershire, north Wiltshire, far west Kent, and some other parts of England; it has a considerable local monopoly. Thames Water is the UK’s largest water and wastewater services company and supplies 2.6 billion litres (570 million imperial gallons) of drinking water per day and treats 4.7 billion litres (1,000 million imperial gallons) of wastewater per day. Thames Water’s 15 million customers comprise 27% of the UK population.

In its goal to reduce its NRW rates by 15% as instructed by the UK regulator OFWAT, Thames Water hired 4 service companies to monitor and maintain its pipes. This case study is about 1 quarter which is serviced by Hydro Save and Aqualogic who monitored this area using Aquarius iQuarius™ mobile solutions and found 3,000 leaks.

Hydro Save and Aqualogic teams surveyed its areas on daily basis. Each IQ team is made of 1 experienced leakage engineer and 3 experienced technicians. Each team has a designated data analyst filtering data and passing POI’s onto the leak engineers for detection and repair. An experienced analysist sifts through 000’s of samples simplifying and speeding up the POI follow up process. 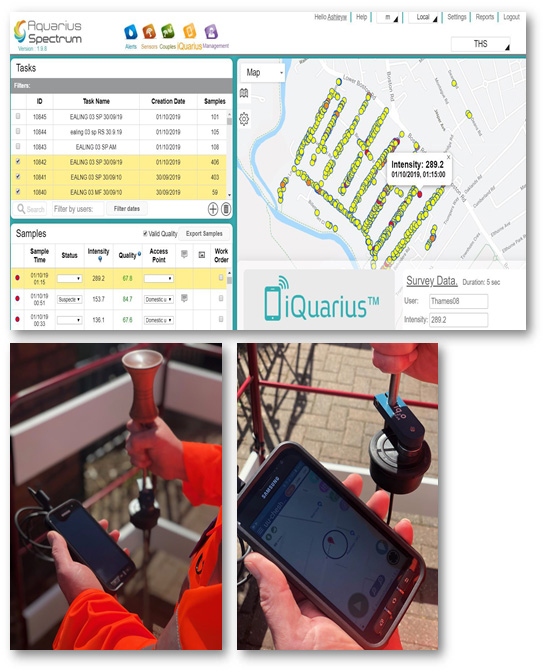 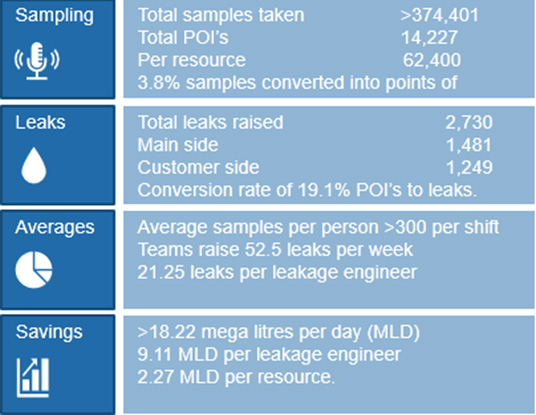